Campaigns that you create using Wishpond can be boosted further on Facebook using Facebook's ad features. This article will explain some of the tips that Wishpond's marketing team provide regarding optimizing your Facebook ad. For more information, please refer to our blog: https://blog.wishpond.com/post/74729797136/the-science-of-optimizing-your-facebook-advertising #### #1 Know Your Goal Before You StartBefore you start your advertising campaign, you need to decide on your goal and find the proper metrics to track your progress toward it.Facebook is nice enough to ask you what your goal is before you start creating your Ad. Make sure you’ve decided on your own goal before choosing one from the list at the start of the “Create Ad” page:

For small businesses, I recommend using Website Conversions as your goal. This will allow you to see exactly how much a new lead or customer costs. And if you are able to pay less on Facebook Ads than a new lead or customer is worth, then your Ads are making you profit.To learn more about calculating your average customer value vs. the cost of acquiring one through Facebook Ads, check out my recent article, Facebook Advertising Costs: CPC, CPM, CPA & CPL Guide.#### #2 Create Smaller Audience SegmentsOne of the keys to optimize your Facebook Ads is finding the right target audience. To do this, I like to break up my entire potential audience into smaller segments. I’ll then run simultaneous Ads for each Target Audience to see which one converts best.To do this properly, you need to make sure that your Target Audiences don’t overlap, or you’ll be showing the same Ad multiple times to the same people. This will not only skew your results, but be very spammy to your audience.I recommend keeping your audience segments between 50,000 - 100,000 people. You can easily see how large your audience is, and how each targeting option affects it’s size, in the Audience Definition box on the right-side of the Facebook Ad creator on Facebook.com: 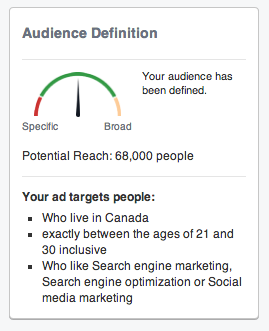 #### #3 Monitor the Right Performance MetricsAs I mentioned above in section #1, the one metric you NEED to focus on is your your average-value-per-customer minus Cost-Per-Customer. You can monitor your CPC, CPM and CTR to make sure they aren’t out of whack, but at the end of the day you should only make changes and tweaks to your Facebook Advertising campaigns based on that one metric, not on anything else.However, if you’re advertising on Facebook to, say, get more Likes on your Facebook Page, then the number you should focus on is Cost-Per-Like. This number will be shown by default in your Facebook Ad Campaigns dashboard:

#### #4: Use Custom Audience and Lookalike TargetingLooking for ways to boost your click-through-rate? Want an easier way to generate new sales than trying to come up with the right Target Audience?Custom Audience and Lookalike Targeting are the answers.Custom Audience TargetingCustom Audience Targeting allows you to show Ads to specific people on Facebook based on their email address or phone number. Simply upload a list of email addresses or phone number and Facebook will match them to their user ID on Facebook, making sure only they see your Ads.Look-A-Like Audience TargetingA lookalike audience is exactly what it sounds like, an audience of users generated by Facebook that best-matches the characteristics of your imported email or phone number list.Facebook examines demographics like age, gender and location as well as precise interests and broad categories of your Custom Audience list. And then an algorithm within Facebook matches those demographic details with existing Facebook users and finds the best possible match for your next ad.Does Custom & Look-A-Like Audience Targeting Work?Yes! Here are a few usage results from a recent article in TechCrunch:An ecommerce company who targeted their email list found a 43% conversion rate increase among signups and a 30% decrease in cost-per-lead.OpenSky targeted members who had either never purchased or not purchased within 30 days. They saw a 30% conversion rate increase.SocialCode found that one campaign with a custom audience found a 15% lower cost-per-like.Another got three times as many engagements/post as standard ads and received two times as many viral engagements such as Facebook likes, Shares and comments.I can already send emails to my emails list for free. Why would I pay to advertise to them?The average email is only opened by about 20% of subscribers. And even less will click-through. So how are you supposed to reach these subscribers who have opted-in to your newsletter and are interested in your business? Custom Audience Facebook Ads are a great way to reach those 80% of subscribers who don’t open your emails, keep them warm and convert them.Learn more about custom audience and lookalike targeting for Facebook Ads.#### #5: Keep It Short & SimpleThe longer your Ad on Facebook, the less people will read it.A recent study found that Facebook posts with 80 characters or less receive 66%higher interaction rates than longer ones. If you want to go even shorter (around 40 characters in length) you’re looking at around 85% engagement. While these numbers are for Facebook posts, News Feed Ads are basically the same format, so it’s a close approximation.Here’s a recent News Feed Ad from Infusionsoft. While it’s a great case study for their company it includes 105 WORDS and over 627 CHARACTERS. When you have as much text as this Ad, most users will be overwhelmed by the volume and simply skip over it. 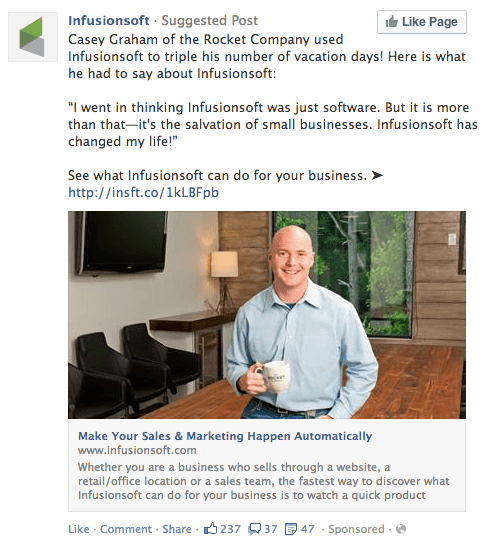 you’re running a News Feed Ad like this, I recommend using this basic formula to keep it short and to the point:Want [Blank]? Get our [Blank] to learn how. 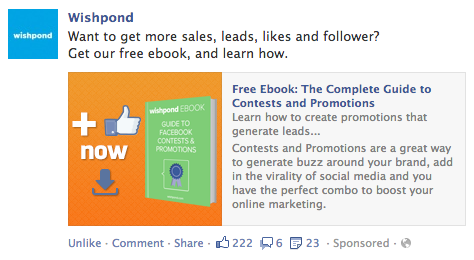 Here’s a recent News Feed Ad that I ran using this formula to promote one of our ebooks:#### #6: A/B Test Your Ad & Landing PageA/B testing is a strategy in marketing in which two versions, A and B, (the Control and the Treatment) are tested against each other. The goal is to identify changes that increase the chance of what you want to occur, is occurring.How To A/B Test Your Facebook Advertising CampaignsA/B testing requires you to create multiple versions of your Ad to test against each other. In each variation you make only one variable of the Ad different. So if you’re A/B testing your Headline, use a different one in each variation, but leave the image and description of the Ad the same for both variations. This way, you will know for sure that it is the Headline that is causing the difference in the Ad’s conversion rate and nothing else.I recommend testing two Ad variations at once. This will make it as fast (and cheap) as possible to see which variation converts the best. You can do multivariate testing, which is testing more than two variations at once. But this requires more time and money for you to see which variation is the best.The Most Important Variables to A/B TestHeadline: This is the bold, blue text at the top of your Facebook Ad. It’s the most important element of your Ad to convince people to click. It’s where people will make their decision to actually stop and click. The description text can help, but the majority of people will have already made their decision to click before they read it.Image: The image’s job is to get your Ad noticed. If you have a good image, it will draw people’s attention.Landing Page: While this is a can of worms in itself, I just need to mention it here because it is often forgotten in the Facebook Ad process. It’s the factor that will determine if people who click your Ad actually convert, buy or sign up.#### #7: Rotate your AdsDo you ever notice that your Facebook Ad’s click-through rate (CTR) starts going down after a few days?This is because your Ad is being continuously shown to the same target audience over and over again. Facebook nicely shows us the average number of times each person saw our Ad under the “Frequency” metric in your Facebook Ads Manager on the individual Campaign page:

To combat this “Ad Fatigue” you need to change your Ad, or rotate it, to keep it new and fresh for your target audience. Rotate different headline copy, action words, image background colors, etc. The Ads don’t need to be drastically different, just enough to not look the same at a quick glance.As a general rule, I recommend rotating your Facebook Ad Creative (the image, copy and benefit/offer) or Target Audience before your Ad’s Frequency hits 8.0.

Was this article helpful?